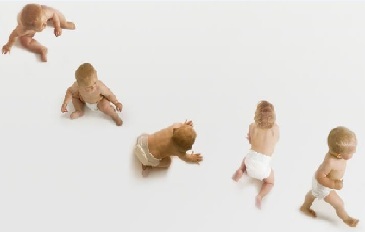 Every child grows at her own pace. However, it is important to note that a child achieves certain milestones till a particular age. During development child needs your upmost attention and love. Following is a general guide that babies are expected to achieve at different ages:

In one month duration the child is expected to do the following:

Baby is growing faster now. You can see him learning new things every few days. However, major milestones include:

By nine months, baby has started crawling. You can hardly find him sitting in one place. They can now pull themselves in standing position with the help of support. He can also:

A year has passed on and your baby has learnt many things till now. The baby can now stand without support and may take few steps too. Some babies start walking too. They try to seek your attention by making different noises and tries to make you understand what they want. They may also:

The baby up to now must have learnt to walk properly. He might be running too. The baby may be using a spoon to feed himself. He may also:

The second year is more about helping your toddler become self sufficient individual. The child needs your encouragement to help him explore his capabilities and surroundings. The physical changes are many. Your child may have learnt to speak three four sentences. He may also:

The child becomes more aware of surrounding and people around him. The language skill of the child develops tremendously. He becomes more interested in your activities. The child may also:

Your toddler has come a long way now. He can now tell stories and even use basic grammar. He loves playing outdoor now. He may also:

To watch your child grow and learn is one of the most satisfying aspect of being a parent. The child may not follow the exact mentioned timeline but still can be in range of normal. However in case of any concerns it is better to consult your pediatrician.