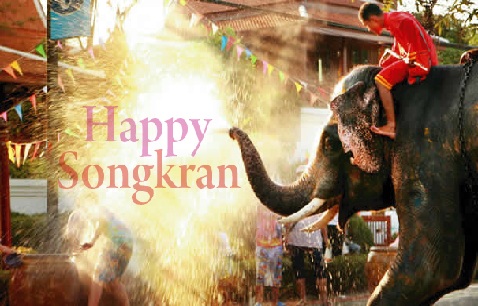 The Songkran festival of Thailand and the world’s biggest water festival were kicked off on Monday amid the nation suffering from a severe drought, worst of the decade. The participants in the streets across the country attack one another from hoses, balloons and water pistols. We wish you happy Songkran wishes in Thai language and gives you day greetings.

The Songkran festival is from 13th April to 15th April. It consists of three days of fun-filled water flights and non-stop revelries. The city of Bangkok sees largest of it.

Every year the Songkran festival is celebrated as marking the beginning of the New Year. Traditionally, families and friends celebrate Songkran by splashing water on each other in the form of a wish for a new year filled with blessings. It is also believed that the water cleans people of their sins and misfortunes.

Thailand is undergoing through severe drought conditions. The critics say, one of the major factors that are causing the rise in temperatures is extensive damming of the Mekong River by China. The river passes through Myanmar, Laos, Thailand, Cambodia and Vietnam. China has constructed six big dams and reservoirs on the Mekong River. Vietnam is also worst hit with its water level dropped to its lowest level in 90 years.

Considering the draught situation, this year Thailand has tried to save water by cutting its festival from four to three days. Curfew has also been imposed at night. This way it will save as much as 5 billion litres of water.