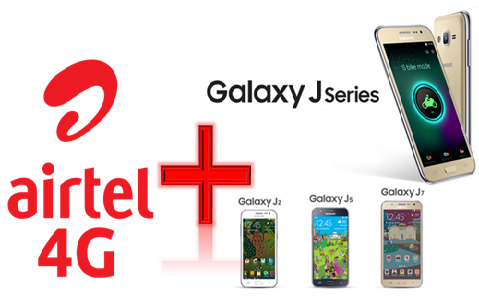 Airtel Data Offer: Airtel, one of the leading telecom operator, is making quite a buzz for some time. It has been in the news due to its 4G launch then the commercial that declares that they now show the towers and networks to their customers openly. The company has now announced that it will provide 10GB 4G data at the nominal price of Rs. 250. This offer is valid for ones who buy Samsung smartphones.

On Friday, the company announced “Available with most of the Samsung Galaxy J-series devices, under the offer, new and existing Airtel prepaid users can avail 10GB of 4G data at a nominal cost of Rs. 250,” the company said in a press statement.

Head of Market and Operations for BhartiAirtel, Mr. AjaiPuri said, “We are delighted to extend our association with the popular Samsung J series. We believe this partnership will help customers enjoy best-in-class smartphone experience on Airtel’s 4G network.”

To get the offer the customers should first log in to www.offers.airtel.com with the help of their new Samsung J series smartphone. This login should be done through mobile data and not Wi-Fi. One should then follow the instructions mentioned. Users can also go to the nearest Airtel outlet and can upgrade to 4G.

Airtel had earlier provided double data offerings to Micromax, Intex, Apple, Xiomi and Lava. For 3G users, Airtel specified that the users can use 1GB of 3G data during daytime and rest of 9GB during the night.

Recently Reliance offered its Jio 4G SIM card free to some Samsung phone buyers. For instance, anyone that buys Samsung S7 can go to Reliance outlet and ask for 4G SIM card. All the operators seem to compete on the basis of 4G. All are trying to attract new as well want to make their bond stronger with current customers by launching new offers and schemes,especially with 4G.