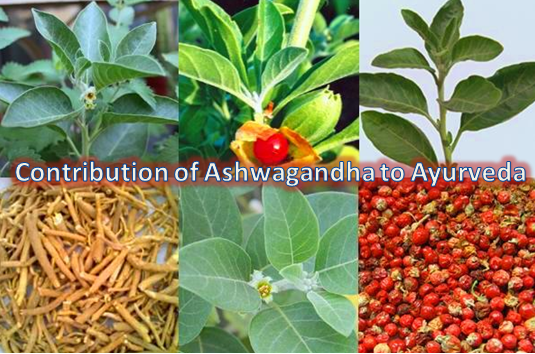 Ashwagandha is a popular Ayurvedic herb. It is also known as Indian Ginseng. It is well known in Ayurveda to relieve physiological and psychological stress. The word Ashwagandha means the smell of a horse. The herb has this name due to its unique smell and its traditional use to boost healthy male reproductive system. It is believed that when a person takes this herb he gains strength like a horse. It is used as a rejuvenating and adaptogenic herb.

In Ayurveda Ashwagandha is known to balance Vata and Kapha. This herb con, however, imbalance pitta due to its heating, unctuous and building nature. It is very useful in supporting healthy reproductive system and muscles.

Useful herb Ashwagandha is available in three forms-liquid, tablet form and powder form. Traditionally, powdered ashwagandha is mixed with warm milk and honey. This is to be taken before bed. This mixture is believed to calm Vata and support healthy reproductive system and sleep patterns. For rejuvenation, Ashwagandha should be added with ghee and honey. Honey can be substituted with sugar. The mixture of herb with sugar and ghee also supports female reproductive system and joints.

Ashwagandha is also available in liquid form and it has a long shelf life. The liquid form is easy to assimilate.

Side Effects of having Ashwagandha

Ashwagandha is believed to be well tolerated but taking large doses can lead to diarrhea and abdominal discomfort.

Ashwagandha is used in India during pregnancy but it is avoided by pregnant women in the west. It is believed to have a spasmolytic effect and can also cause abortions in animals.

Various researches are being carried out on Ashwagandha due to its variety of benefits. It has been a topic of research due to its benefits on the immune system. It is also been found how it supports the immune system during radiation and chemotherapy. It also shows antioxidant property in combination with other products.