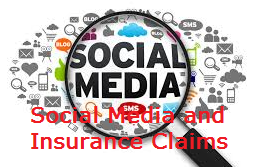 Social media and insurance claim: It is looking strange but insurance companies search into social networking sites such as Facebook, Twitter, Orkut and so on to see a record of their customers. They surf social sites and find scoops it there is. They are creating programmes to automate the process of searching social media, which would allow insurers and other companies to find data easily from social sites like Facebook, Twitter and other. This data will be used for credit scores of customers.

The executive director of Consumer Watchdog says that data mining companies use the Internet and collect customer data about what he like, say and where he searches online. They use that information to create a social media score and insurance companies buy it in consideration. This data are precious for insurance companies because of all info on consumer’s social network, create scores or rates. There is testimony in the media and insurers are going to use social data to determine rates or scores.

Michael Packer says that some insurers are using the Internet and social media websites from many times as they have contracted with consumers to use them as underwriting or claims handling the process.

Many people will raise the question here that how they get info from sites and linked with the claim? They use social information for due diligence and to verify only. Online data are using to dispute claims. Let me take an example. If a person claims for his ill health, but on media, he put pictures of celebrating a function then he will trap in a net.

For an insurer, it is also important to know if a policyholder is engaged in scuba diving, skydiving, shark diving or any other dangerous activities. If a policyholder describes in a policy that he is a non- smoker and he puts photos with a cigarette in a hand, will cause harm. The company also have right to deny a claim if it found the truth later i.e. after accepting a claim.

On the other hand, social information is also used for confirming the validity of claim also. Social websites score help to measure premiums amount on the basis of credit scores. It also determines whether a person qualifies for coverage or whether the claim is to be accepting or reject.

To stop accessing social media information, keep privacy setting on online sites that only friends can see your activities. And very simple as important thing Packer says, ‘be honest when filing a claim’.