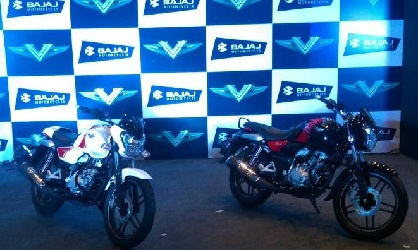 Bajaj V15 price in Ahmedabad/Surat: Bajaj has launched its much awaited Bajaj V15 at a sticker price of Rs 62,000 (ex-showroom Delhi). Check Bajaj bike V15 in photos, check all colors, price on road and mileage reviews by the user.

The company was able to create a lot of buzzes when the teaser of the bike was released on republic day. The video showed that company purchased the scrap metal of INS Vikrant warship and melt to make V15. The fuel tank of the new V15 is made from the Scrap of INS Vikrant else the entire body is made up of regular metal. V in V15 stands for INS Vikrant warship.

Anyone can book the vehicle by paying just Rs 1000 at nearby Bajaj two wheeler showroom but the deliveries will only start from 23rd March. With its launched price it comes in between discover and Pulsar motorcycle range.

The bike has trapezoidal headlight which is claimed to be 60 percent brighter than other bikes on the road. The company has used LED lights in rear brake lamp giving it a more premium look.

The bike is on display at authorized Bajaj dealerships around the country. Bajaj V15 will be available in two colors Pearl white and Ebony black.