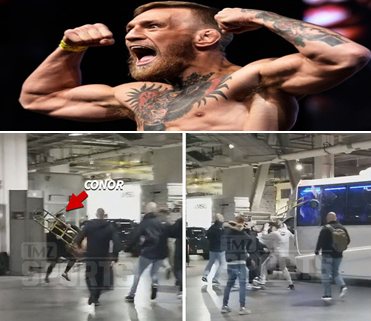 A former lightweight UFC champion Conor McGregor has been charged with assault and criminal mischief and put into police custody after he and others attacked a bus carrying UFC fighters at Barclays Center in Brooklyn. You can see Conor Mcgregor bus attack video at here. But, here is a question in the mind of all fans, ‘why did Conor Mcgregor attack bus?’

The incident took place after a media-day event for UFC 223 on Thursday. Another MMA fighter, Cian Cowley is also charged with assault and criminal mischief along with Conor McGregor. The incident caused injuries to several sitting on the bus including two athletes who now won’t be able to fight in UFC 223 scheduled on Saturday due to injury.

McGregor is accused of smashing the glass of a bus window by throwing a two-wheeled dolly at it. Cowley allegedly threw a chair at the bus. The incident was captured into several cell phone video cameras.

McGregor along with about 20 people went to the mid-day event arena. They went down to the loading dock where some were getting into the bus for Saturday’s event. They hurled different objects at the bus. The bus was carrying participants for UFC 223 to a nearby hotel.

Reacting to the incident, UFC President White said: “This is the most disgusting thing that has ever happened in the history of the company”. He also said that McGregor had some sort of beef with Khabib Nurmagomedov who was on the bus. Khabib Nurmagomedov is to fight for UFC lightweight title scheduled on Saturday; McGregor is vacating it as he hasn’t fought with UFC since 2016.

Due to face and eye injuries caused by the incident, two fighters Chiesa and Ray Borg have been forced to withdraw from their scheduled fights. Artem Lobov, a third fighter has been removed from the fight card by the UFC President due to his involvement in the incident.

Conor McGregor had become MMA champion in UFC in November 2016 and had become a global icon; he took mixed martial arts (MMA) to new heights. After the span of just 18 months, he not only assaulted some people but the sport itself which earned him name and fame. He also endangered the safety of his fellow fighters as well.