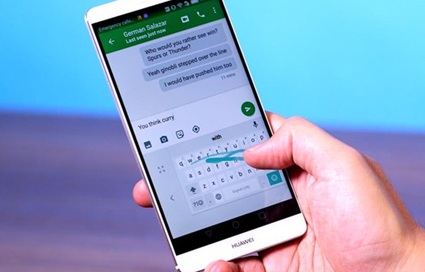 With smartphone screens size getting bigger, typing with one hand is getting more difficult. Google’s new keyboard update will help overcome the limitation. To activate the one-handed feature, users just need to hold fingers down on the comma. The keyboard then changes size and it becomes easier to type with one hand. You just tap another button and the keyboard returns to its full-screen width.

Google keyboard typing is made fast and easy with gesture and voice control. With gesture typing, you can glide through letters to enter words. You just have to lift your finger to finish a word and for a new word gesture again. It doesn’t require spacebar to separate words. On dictating text, users also find improvements to auto-correction as well as next-word predictions.

You can also compose text on-the-go with voice typing.

Moreover, the app also includes full emoji support and the feature can be very useful when you can’t find the right words to express.

As keyboard is running in numerous Android-based devices, there is a growing competition over keyboard dominance. Microsoft also released its Word Flow keyboard for one-handed support to iPhones last week. Microsoft also has a popular third-party keyboard maker known as SwiftKey.