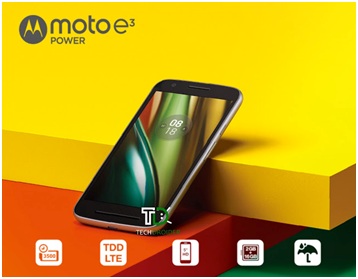 Motorola has started selling off Moto e3 Power, a variant of Moto e3 in Hong Kong at a price of HKD 1,098 (approximately Rs. 9,500). Motorola had unveiled Moto e3last month only. As the name suggests the new smartphone has a more powerful battery. Motorola has not made any official announcement about launching the phone but is available for sell through a third party online retailer in Hong Kong.

The smartphone comes with an 8MP rare camera with auto-focus and LED flash and a 5MP front camera. The device is backed by a 3,500mAh battery which is a big jump from 2,390mAh battery packed in Moto e3. It provides connectivity to4G LTE, Wi-Fi, Bluetooth, and GPS.

Moto e3Power is a dual SIM phone and operates on Android 6.0 Marshmallow. It is likely that it might be getting 7.0 Nougat update soon.

The Moto smartphone is available in black colour.Nothing officially has been announced about its availability in international market too.Motorola is yet to introduce the Moto E3 in India. The company has started selling itMoto G4 since June priced at Rs. 12,499 exclusively on Amazon India.