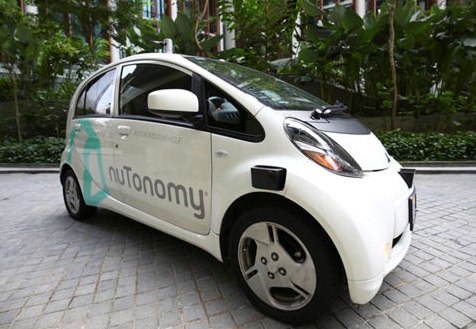 Singapore has become world’s first country to launch self-driving taxis as self-driving taxis have started rolling out on the roads of Singapore from Thursday. The taxi service is made available for public use on a trial base. Invited members of the public can summon and ride the self-driving car in a small area of 200 hectares in a business park in a small district of Singapore named one-north. Though the car is self-driving, a driver will sit in front as a precautionary measure and take control of it if needed.

Singapore’s nuTonomy is the company which is offering this service. There is a fleet of six reconfigured Renault Zoes and Mitsubishi i-MiEV electric cars that will ferry the riders. A team of the researcher will also accompany the public riders in order to monitor the performance. nuTonomy was founded by two research engineers from the renowned MIT.

Many companies such as Uber, Ford,Volvo Google are testing and planning to launch driverless cars, but this is the first time self-driving cars are on the roads open to public use. nuTonomy had support from Singapore government in this venture. Singapore government is seeking to turn the city-state into a hub for ground-breaking technology and also offers generous financial assistance programs to carry out research.

NuTonomy, through its autonomous driving projects, is promoting self-driving taxis as part of its efforts to reduce dependence on privately owned cars. According to Doug Parker, COO of the company,autonomous taxis could reduce cars on Singapore’s roads from 900,000 to 300,000. And it can change the whole scenario leading to smaller roads and smaller parking area. It will open up new possibilities in the coming future.

The company has the plan to expand access to a self-driving car to thousands of people within coming few months. It also claims that autonomous cars without any safety driver would run on the roads within five years.

The Company is also planning autonomous driving plans in three other Asian countries and some cities of US and UK.