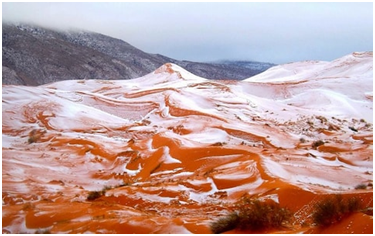 Sahara Desert Snowfall 2018: Ain Sefra, a town on the edge of the Sahara desert experienced a substantial amount of snowfall in January 2018. The peaks of sand dunes were beautifully capped with light dusting of snow, a rare phenomenon in the desert. Here we will check Algeria desert online news.

Ain Sefra, also known as “Gateway to the Sahara” is a desert town situated in Algeria. The snowfall made otherworldly visuals from a town which during summer witnesses some of the hottest temperature in the world. The smattering of snow on the desert sand made a delightful landscape, and natives of the Aïn Séfra area were tremendously excited, children enjoyed racing down the snow and ice sliding.

Snowfall is a rare phenomenon as Sahara being the largest desert and the hottest place in the world. According to reports, some of the area received about 15 inches of snow. Usually, the snow disappears as the hot day starts, but it stayed longer. Sahara gets cold at night, but being a desert there is hardly any water around for precipitation to take place and snow formation. As at some of the places temperature gets as low as tens of degree Fahrenheit, to find little snow is not unusual, but it is neither much nor stays longer.

This is perhaps third or forth time in last 40 years that snowballing took place. Similar phenomenon had happened last year too but it is claimed that before that it had happened 37 years back in the Ain Sefra town.