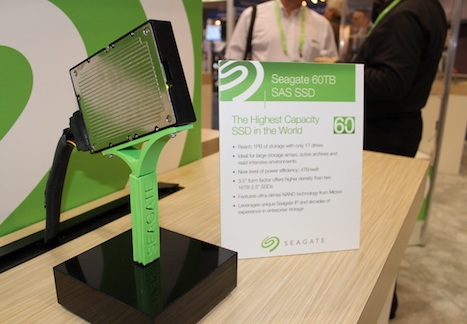 Seagate’s has introduced the largest SSD by the launch of its 60 TB SSD. This has left behind 15TB SSD launched by Samsung earlier. This new SSD was launched in Flash Memory Summit in California. The price of 60 TB SSD is not available yet but the company promises that it will give lowest cost per Gigabyte for flash memory.

IT will be not correct to compare the two drives as Samsung’s unit comes in standard 2.5-inch SSD whereas the new Seagate’s SSD come in 3.5-inch hard drive form factor. Seagate believes that the 3.5-inch factor will be helpful for managing the changing storage requirements in data centers. This could be possible as it removes the requirement to store cold and hot data separately.

According to Seagate, its new SSD has twice the density and four times the capacity as compared to Samsung.Seagate 60 TB SSD can hold up to 400 million photos or 12000 movies.

The new Seagate SSD uses Micron’s NAND flash. There are no details about the performance but the power consumption is 1W per terabyte.It uses a 12 Gbps SAS interface and consumes 15 watts of power.

Seagate has also launched the 8TBNytro XP7200 NVMe SSD, that targets hyper-scale data centers and catering for applications that involve high-performance computing and big-data analytics. This new device will be available through Seagate’s partners in the fourth quarter.

Seagate says that its 60TB SSD is demonstration technology but it expects the release of SSD commercially by early next year.