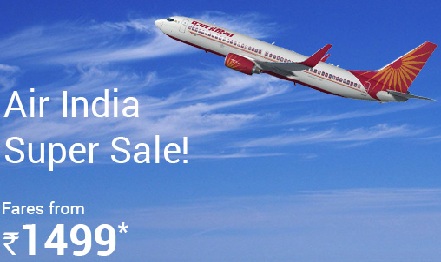 After Indigo, SpiceJet and AirAsia India, Air India has announced low air fare from July to September. The super sale scheme launched by government owned Air India starts at as low as Rs 1,499 (all inclusive).

According to the airlines, the `super sale’ scheme offer passengers ticket at attractive fares starting from Rs 1,499 (all inclusive) on its domestic network.

The sale starts from May 21 to May 25. The airlines announced it on their official twitter account. In the same announcement it further said that offer will be valid from 1st July to September 30.

According to the insiders the airlines not only do this seeing the demand but also try to increase customers in the lean seasons. The period from January to March and July to September is considered as lean season.

Recently, SpiceJet lured customers by announcing its one way fare starting at as low as Rs 511 and Indigo announced Rs 800 fare offer.

It will be interesting to watch the fare war between the airlines and fliers will be benefited in all terms.