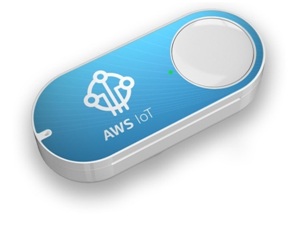 Amazon’s Customizable Dash Button for the Internet of Things

Amazon has unveiled a new customizable AWS IoT Button, an updated version of Dash Button which was released in March 2015. It can be programmed to perform various things at just press of a button.

The new AWS IoT Button also called the Amazon Web Services Internet of Things Button. Developers can customize it to order various things online, activate an appliance, trigger lights, call taxi service, order a pizza, post to Face book or Twitter, send a message and many more things. You can order products from more than 100 brands to be ordered with a single tap, you don’t need web browser for it, and products will be delivered to your address.

Each button connects to Amazon’s AWS cloud through a Wi-Fi network. Amazon has made it very easy to program the button and even novice user will find no difficulty in doing so. It offers much flexibility to use the wireless key for quite ambitious projects.

The new AWS IoT Button is designed primarily for developers to program their own functions and not only just to order more of something. It can be programmed to respond to different inputs such as a double-click or a longer press, and perform different functions accordingly. Developers and Internet of Things tinkerers can dig into it to work out desired functionality. Moreover, to connect the button to third party devices, it requires coding in languages such as Node.js, Python, or Java.

The AWS IoT Button is priced at $20. It was released in limited stocks and customers found it so appealing that the product ran out of the stock in a day, it was released on 15th May.