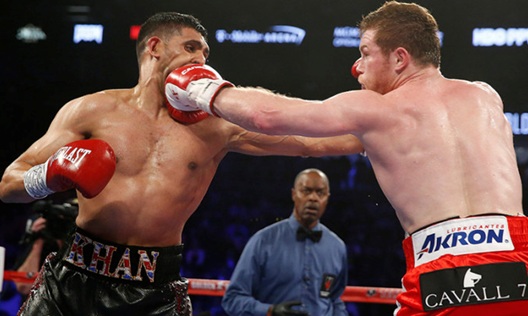 An intricate moment came on Saturday night in Las Vegas when Alvarez retained the WBC middleweight title with knockout win over Amir Khan at The Strip’s new T-Mobile Arena.

Khan had made a tremendous start against Alvarez, but he soon found himself pegged back by Canelo, who hunted him down, as he began to find his range. Canelo grabbed the opportunity and unloaded a right-hand and caught him flush on the chin, sending him crashing to the canvas. Immediately, referee Kenny Bayless called the fight to a halt. Canelo battled his way back in the sixth round.

After celebrating his knockout briefly with members of his team, Alvarez raced to the ropes soon and asked Gennady Golovkin to enter the ring. Golovkin holds the IBF, WBA and interim WBC belts and he is an undefeated knockout artist who is drawing huge ratings on HBO and a massive cult following. WBC president allowed the Amir – Canelo fight to proceed with the stipulation that the winner must fight Golovkin next.

Alvarez said on Saturday that he wants to fight Golovkin: “I’ll fight him right now. Let’s put the gloves on and get in there with him.” Golovkin did his interim bout; he wasted no time in throwing down the challenge to Alvarez on social media.

Canelo versus GGG is one of the most important events in the sport of boxing, and their promotional companies and partners have been communicating openly and in good faith. Fans are also eager to see it. ESPN’s Dan Rafael Rafael even went so far as to say that Alvarez vs. Golovkin would be “the biggest fight” in boxing.