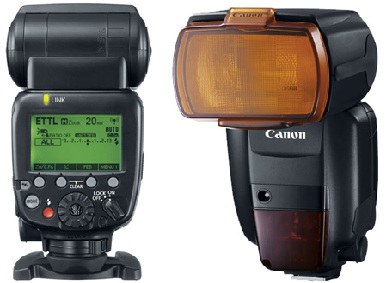 The new flagship Cannon Speedlite 600EX II-RT, is an update to its flagship 600EX RT. It is built on wireless technology and supports shooting via radio and optical transmission. It fits in perfectly as part of a multi-flash setup. It includes an illuminated dot matrix LCD panel on the rear that displays useful information. It also comes with a SCF-E3 hard-type colour filter set and a soft carrying case. You can buy an optional battery pack that provides improved continuous flash firing and more flashes per charge.

The Cannon Speedlite 600EX II-RT comes with very innovative features such as:

The EF-M 28mm f/3.5 Macro IS STM lens features a pair of built-in flash rings, an accessory that will make photography an exclusive experience to those who are interested in extreme macro photography. The company claims the EF-M 28mm f/3.5 Macro IS STM as the lightest macro lens for mirror less interchangeable lens cameras. It just weighs 130 g. It is equipped with two curved flash modules surround the front element of the lens. Both the lens can be lit simultaneously. You can also use one at a time, the feature will help shooters to create left or right shadows if interested.

The miniature Macro Lite electronic flash helps remove shadow and darkness from objects. Users can also adjust brightness. With the flash built into the end of the lens, it eliminates shadows being created by the lens itself, which is common with pop-up style flashes and longer lens.

You can capture subtle details of a subject with the Super Macro Mode that allows shooting at a magnification of up to 1.2 times. It also features hybrid image stabilization system and a stepping motor for quiet focusing when taking photos as well as shooting videos.