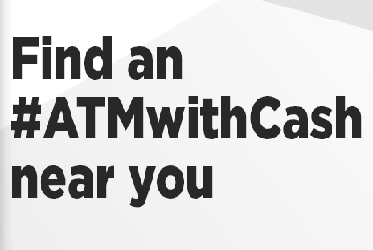 ATM Near Me with Cash – Discover ATM Locator

A surgical strike against black money announced by PM Narendra Modi has made Indians stand in queues for long hours. People stand in queues for hours to get their old money exchanged or to deposit their money in their respective accounts. What creates, even more, a problem is the fact that many ATM’s either stop working or go out of cash. ATM’s out of service increases the problem of people. However, the internet can come to rescue such people in problem.

Social media has turned up as the most important tool to gather outsourcing information about the working ATM’s. People are coming forward on these platforms to help each other. Earlier, Social media has emerged as an effective tool in distributing food and giving other required help at the times of floods in Chennai. This time too many people are willingly ready to help others through Facebook and Twitter.

There are three main hashtags on Facebook and twitter namely #WorkingATMs, #ATMswithCash, and #ATMsNearYou. People have used this hashtags and have got some really good response. But it is better to check this truth before yourself going to the ATMs.

Another good way to find the working ATMs is the crowdsourcing website like ATM Search. You can know about the ATMs nearby you through this. Many people complained that the website was not working accurately when they used it but you can test your luck maybe you can be lucky enough to get the accurate answer. Again it is always better to investigate all by yourself before trusting. One should always inquire in the surrounding before going to ATM’s that are located far from one’s residence.

It seems social media again proves that it is not only a pastime for people but it emerges as one of the important platforms when comes to helping others. However as said earlier, before believing anybody, it is always safe to investigate into the matter by oneself.