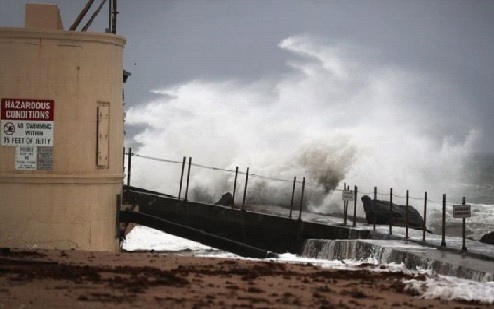 Matthew Hurricane Video Footage: Hurricane Matthew battered the Florida coast with strong winds and torrential raining leaving thousands of people without power Thursday night. About 300,000 people are without power in Florida and more than a million people in the path of the storm have been ordered to leave their homes.

17 feet high waves were observed 20 Miles east of Cape Canaveral, the home of the Kennedy Space Center. You can see Hurricane effects in Florida in here given Matthew video footage. The devastating storm is likely to continue for two days and can expand its stretches from central Florida up into South Carolina. It is also feared that the storm surge might be coupled with up to 15 inches of rain at some spots and can cause catastrophic flooding.

Overnight the Matthew has weakened from a Category 4 to a Category 3, but the howling winds and heavy rains are battering coastal communities.

See also  Tips to Avoid Financial Problems and How to Solutions

A press conference was called by Scott. He warned people and sounded alarmed for them in coastal Florida. He feared it as killing storm and urged residents take precautionary measures such as food, water and medicine supply for three days and keep their mobile phone charged.

President Barack Obama has declared a state of emergency in Florida as well as South Carolina because of Matthew Hurricane. Federal states have also been asked to aid state, tribal and local response efforts.

According to the National Weather Service, this hurricane could well exceed three large storms that had hit the state in 2004. Waves could reach up to 18 feet severe coastal surging.