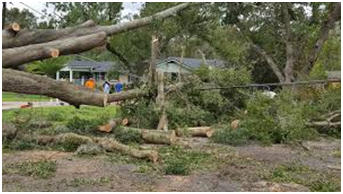 Irma aftermath Florida: As Hurricane Irma swept north into Georgia and downgraded to tropical storm, the officials have started assessing the scale of destruction wreaked by it across Florida today.

Irma had made the first landfall on the Florida Keys Sunday morning, then on later Sunday on Marco Island on the state’s Gulf Coast. The storm then moved north living its heavy impact.

Though the winds have subsided, numerous towns and cities in the State are submerged under water. The damage is catastrophic; the streets have turned into streams sweeping across debris of uprooted trees and pummeled houses along with it. Residents implored to return home have been urged by the officials to be very cautious of flash floods and electrocution. Still, the cities and towns are likely to get flooded due to storm surges, high tides over-spilling of swollen rivers. Residents and workers on the upper islands are being allowed to return.

Rescue operations are underway. Help is being provided to people stuck in damaged houses or damaged cars. People are also inquiring about their families and friends who needed help or who had lost contact.

Irma had affected The Florida Keys the worst. Fifteen million people are without power in Florida and on Tuesday. An aerial survey depicts devastation everywhere with washed ashore, overturned boats overturned boats, damaged buildings etc. There is no water supply in the houses as well as no electric power. It will take weeks for the authorities to restore the services. Efforts are being made to restore power in the hospitals first with 36 hospitals closed and 54 using back up power generators for electricity in Florida.

Not all the areas have been affected, some of the areas remained almost unscathed. Military crews are on standby to help those who failed to follow a mandatory evacuation order.