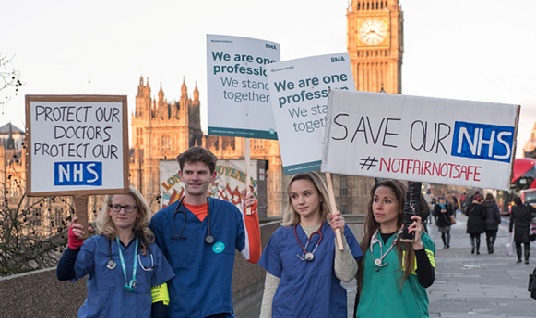 To protest and seek judicial review of government’s plan to implement new contracts. British Medical Association (BMA) has announced an industrial action for it. Junior doctors will go on 48-hour strike from 8:00 am on April 6.

There is a further plan of all-out stoppages from 08:00am to 17:00pm on 26 and 27 April inclusive emergency. This would be the first time doctors have removed the cover from A&E and intensive care. It will be a huge disruption to services.

There is a long-running dispute over the issues such as working hours, pay and patients’ safety. Attempts to compromise over the issues between BMA, the NHS, and government have failed earlier. According to the chairman of the BMA’s junior Doctors’ committee, the new contract to be introduced is unfair and junior doctors have no confidence in it.

Hospitals are planning to put with the industrial action. Emergency care will not be affected due to the strike. The number of non-emergency operations will need to be cancelled. Appointment on the said date will be rescheduled and the affected will not go to the back of the queue. Patients have been advised to stock up with medication in good time beforehand. Local pharmacy, GP, NHS 111 and NHS choices website will offer help for minor health conditions.

According to BMA, junior doctors are left with no choice. Medical leaders say the strike should be suspended.