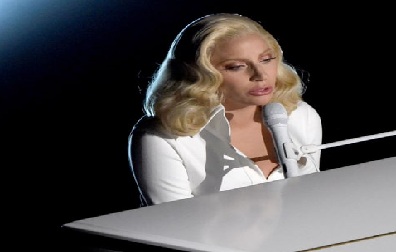 Lady Gaga has mesmerized audiences many times. But her performance in the Oscars 2016 brought tears into eyes of many.

Lady gaga was to perform on her nominated song `Til it happens to you’. Her performance was introduced by vice president Joe Biden. He said that still many men and women are the victim of abuse on and off the college campuses. Joe requested people watching the award help end sexual assault and violence from college campuses in the US.

Lady Gaga was accompanied on the stage by many survivors of sexual Abuse. Gaga performed on the haunting song along with a white grand piano. At times, she looked agitated and at times in tears while communicating how it feels after sexual violence.

The performance melted many hearts at the event and received standing ovation too. Before her performance, Gaga had made it clear she will have Kesha (one who lost her bid to be released from Sony contract under which she has to work for Dr.Luke)

The track `Till it happens to you’ was written by Gaga and Diane Warren for the documentary `The Hunting Ground’ that focuses on sexual assault and violence in the US campuses. The song was also nominated in Oscars for original track. Lady Gaga successfully performed the second time in the row at Oscars. Her performance at Oscars in 2015 was appreciated too.

Lady Gaga delivered a powerful performance but missed the award for the same to Sam Smith and Jimmy Napes.