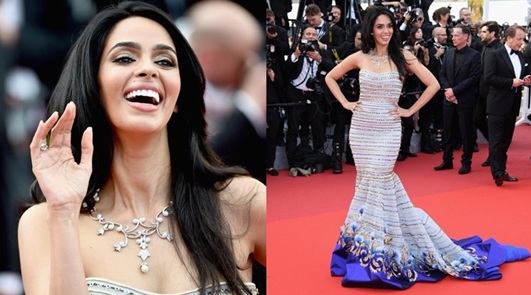 The 39-year-old actress looked stunning in a strapless Georges Hobeika Couture gown with a striped pattern from the Fall-Winter 2015-16 collection. The dress had golden embellishments and the trail had intricate work with blue flower motifs.

Before Mallika walked the red carpet, she posed for the paparazzi during the photo call of her film “Time Raider” at the Cannes Film Festival adorned in a blue halter neck gown by Emilio Pucci.

The star took to her Twitter handle to share photos from the photo call and her red carpet appearances.

Sherawat is in South of France at Cannes mainly to promote her international film Time Raiders. The film is directed by Daniel Lee. Most of the movie is shot in sub-zero temperatures in China in 2015. Mallika has started the Indian campaign at the Cannes Film Festival. She made to opening ceremony of the most popular film festival of the year by walking the red carpet for Woody Allen’s Cafe Society.