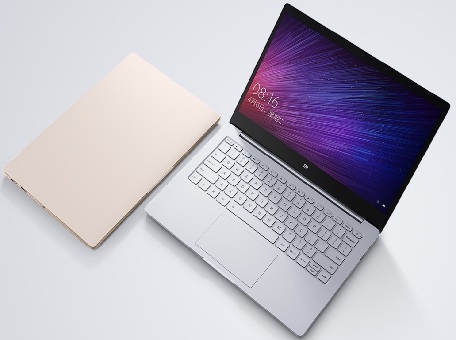 There is an end to a long time buzz about Xiaomi launching a Notebook which is claimed to be similar to Apple’s MacBook. The Company unveiled two ultra-portable notebooks in two sizes: 12.5-inch and 13.3-inchpriced at $520 and $750 respectively. It will be made available for sale in China for sale from 2ndAugust; date for availability in a global market is yet to be announced.

China’s Xiaomi is well known for its budget-friendly smartphones, it has ventured into other tech products such as action cameras, water purifiers, smart weighing scales and now a laptop. Xiaomi Mi Notebook Air is the first Notebook offering the Company has launched. Xiaomi has made it in partnership with Tian Mi, but it will be sold under Xiaomi brand only. Xiaomi Notebook Air was unveiled at an event in Beijing along with the dual-camera wielding Redmi Pro phone. According to Lei Jun, CEO of Xiaomi, the 13.3-inch Mi Notebook Air is designed to fill a niche.

Xiaomi Mi Notebook Air is being offered at a price almost 30% of the price for Apple MacBook Air. The 13.3 inch is even lighter and thinner to Apple’s13-inch version, whereas 12.5 inch is thinner but little heavier than MacBook Air 11 inch.

MI Notebook Air in both sizes is available in metallic silver and gold variants. It has a graphic card inbuilt in it. The Notebooks can be unlocked via Bluetooth by the Mi Band 2. You won’t find MI logo on the Notebook. But you can personalize it with official sticker accessories. It features Mi Cloud Sync that lets you sync contacts, messages, calendars etc. easily. Mi runs on Windows 10.

The 13.3 inch Xiaomi Mi Notebook Air is very slim and light that weighs 1.28 kg. It has full HD display with 1,920 x 1,080 pixels which equal to a pixel density of 165 ppi. The Notebook Air is equipped with 2.7GHz Intel Core i5-6200U processor along with the NVIDIA GeForce 940MX GPU having 1GB GDDR5 RAM. It has 8 GB DDR4 RAM and 256 GB of SSD via PCIe. The memory can be expanded through SATA slot. There is a backlit keyboard, two USB 3.0 ports, HDMI port, dual AKG speakers and a 1 MP webcam. The Notebook has a 40Wh battery which can be charged to 50% in half an hour only. Xiaomi claims that battery last for 9.5 hours.

12.5 inch Xiaomi Mi Notebook Air is ultra slim and weighs 1.03 kg. The display screen is full HD display with 176 pixels per inch. It comes with Intel Core M3 CPU. It sports 4 GB RAM and 128 GB SSD via SATA. It has one USB 3.0 port, HDMI port, and dual AKG speakers. The Notebook has a battery that can last for 11.5 hours.

Xiaomi MI Notebook has a sleek design, looks elegant and attractive. It has latest hardware specifications. But at the same time, it has to compete with rivals. It is believed that it will function just like MacBook Air. Apple has designed its MacBook with finesse and packaged all the aspects very well. It focuses more on experience and software optimizations rather than core hardware and the MacBook Air works flawlessly. It has proven its versatility in the market. It remains to see how Xiaomi will fare in the competition.

Mi gaming capabilities might be limited as it lacks discrete graphics. Xiaomi claims that it supports Dota 2 at 85 frames-per-second at a full-HD resolution on its Notebook Air and it will provide good gaming experience.