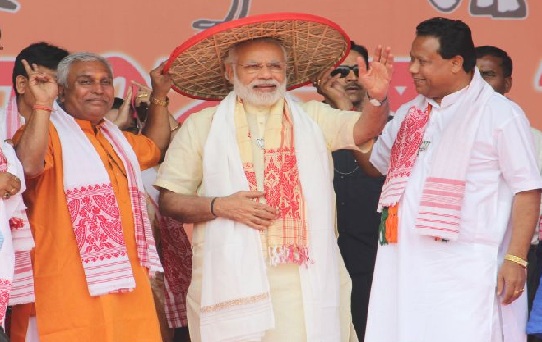 ‘I Am Not Fighting Gogoi But Gareebi’, Says PM Modi in Assam

Prime Minister Narendra Modi heads for BJP election campaign is Assam and is to address seven rallies in two days. While addressing a rally in Tinsukia today he gave a new slogan “I am not fighting Gogoi but Gareebi (poverty)”. Mr. Tarun Gogoi is Congress Chief Minister of Assam for the last fifteen years. Here you can watch PM speech video of Tinsukia, Assam, date 26th March 2016.

Video news On: Not fighting Gogoi, am fighting Garibi in Assam

PM Modi also said that his party has the only agenda for Assam is development, speedy development and overall development. He urged the people to give BJP a chance to work for next five years.

According to him, there are enough funds for the state, but most of it go unused. And now is the time that the people should ask the current Congress government what it did in last 15 years.

BJP party President Amit Shah and other ministers, as well as party leaders, have plunged into the election campaign in Assam and addressing rallies in various parts of Assam. They are targeting Congress for poor conditions of the state of people living below poverty line and without access to clean drinking water, electricity increased maternal and child mortality rate and pathetic conditions of tea workers there.

Assam is to go to the polls next month. The election will take place in two phases on 4th and 11th April. There are 126 assembly seats in Assam and BJP is contesting for 91 seats. For some of the seats, the party has joined hands with Asom Gana Parishad and Bodoland People’s Front. The counting will take place on 19th May.