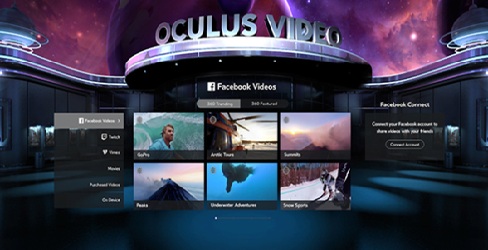 Hulu now enters the world of virtual reality with a new app developed for Samsung Gear VR powered by Oculus. You can download the app from the Gear VR Oculus Store and it contains an exclusive catalog that includes movies and TV shows.

Hulu has kept it promises that it had announced in 2015 that it would enter into VR and VR fans were eagerly waiting to hear the news of its launch. The Company head Ben Smith is very excited with the release of the app and feels that it will provide an unmatched experience.

The app is user-friendly and the consumers can navigate through it with ease through menus. And one can easily switch between Hulu’s immersive VR videos and traditional library content. It offers users an access to the entire 2D Hulu library in a 360-degree environment as well as a collection of VR content that offers an immersive experience in a true sense.

Currently 25 VR titles are made available that includes Studio Transcendent, Discovery, The National Geographic Channel, Viacom and much more. The 3D VR content is available for free to all app users.

The app is compatible with high-ends Samsung mobiles such as Galaxy Note 5, Galaxy S7 and the Galaxy S7 Edge, Galaxy S6 Edge+ and Galaxy S6. Hulu has plans to add much more VR content soon.