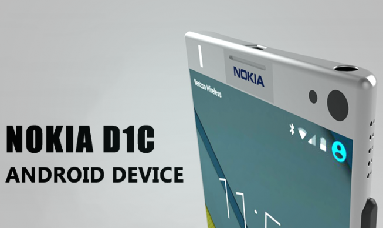 Nokia is Believed to Launch Its New Smartphones in MWC 2017

Nokia D1C Features and Price: Nokia has been in news for its comeback in smartphone sector in 2017. The news has been now confirmed by HMD Global, a company which is responsible for Nokia’s comeback. It has confirmed Nokia’s presence in MWC 2017.

There was a time when Nokia was a leading mobile manufacturer in the world. But with developing times and increasing technologies, the company could not keep up with times. As the growth of smartphone increased the popularity of Nokia decreased tremendously. This year in May, however, the company opted HMD Global for a license to create mobile phones and tablets for Nokia for next 10 years.

In Mobile World Congress that is to be held in 2017, CEO of Nokia, Rajeev Suri, will speak. This supports the news that Nokia will launch its new smartphones in 2017.

Earlier it was said that D1C is a tablet but pictures that have been leaked have proved that it is not a tablet but smartphone. This picture confirms that Nokia is doing a comeback in the smartphone section.

Pictures that are leaked show that the phone has metal rounded edges. Volume and power buttons are present on the right. It is believed that phone will be available in three different colors – Gold, White, and Black. It is rumored that the Gold variant will have a fingerprint scanner in the Home button. The phone is supposed to have 64 bit Qualcomm Snapdragon 430 octa-core processor. D1C is said to have 32GB internal storage, 3GB of RAM and Adreno 505 GPU and full HD screen.

As far as the camera is concerned, it is said that phone will have 13MP front and 8MP rear camera. 4G LTE, Wi-Fi Bluetooth 4.0 as well as GPS/A-GPS will be supported for connectivity.It is also rumored that there will two flagship smartphones that support Snapdragon 820 processor.

As far as the price is concerned, the D1C is supposed to be priced at Rs. 20,000 and the smartphones with top specification will be available at Rs. 30,000.

However, all these specifications are rumored and the truth will only be known when Nokia itself will make any announcement. We will have to wait until February 2017, when MWC will be held.