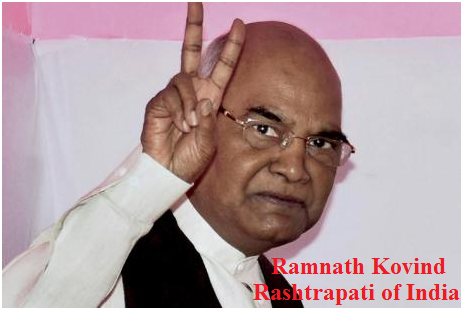 Shri Ramnath Kovind Biodata: He has been elected as new President of India (Rashtrapati of India). He has garnered 64.4% votes and won by a margin of 3.34 lakh votes. He will take the office on 25th July and will be honored as 14th President of India. With this, he will be the 2nd Dalit President of India after K R Narayan. There was a contest for the position of President between BJP-led National Democratic Alliance (NDA) nominee Ramnath Kovind and Congress party led nominee Mira Kumar.

Mr. Kovind was born on 1st October 1945 in a small village Paraunkh, Derapur, Kanpur Dehat of Uttar Pradesh to Kalavati and Maiku Lal in a farmer family. He took his Bachelor’s degree in commerce and studied law and took LLB from DAV College, Kanpur. Then he moved to Delhi and prepared for Civil Services Examination. He passed the examination at the third attempt, but was selected for an allied service, not IAS, and didn’t join it. He started practicing law.

His Career as an Advocate

Many students searching for Ramnath Kovind Biodata and life details. Mr. Kovind has a long standing in politics. He has been a personal assistant to Morarji Desai in 1977-1978 when he was Prime Minister of India. He joined BJP in 1991. He remained President of Dalit Morcha wing of BJP between 1998 and 2002 and was a national spokesperson for the party. He contested for assembly election twice from Uttar Pradesh but lost. He has been Member of Rajya Sabha twice from Uttar Pradesh and served as Rajya Sabha MP for consecutive 12 years.

Kovind has been successful as a political leader and has won many accolades. During his position in Rajya Sabha, he has served as a member of the Parliamentary committee for the welfare of Scheduled Cast/Scheduled Tribes, home ministry, petroleum ministry, social justice and Chairman of Rajya Sabha House Committee.

Shri Kovind has worked in the field of education. As an MP, he laid emphasis on basic infrastructure development for education in rural areas and focused on the construction of school buildings in Uttar Pradesh and Uttrakhand. He has enjoyed an eminent position in premier institutes of education in India. He has got the honor to serve on the Board of management of Dr. B.R Ambedkar University, Lucknow, Board of Management IIM, Lucknow, a member of Board of Governor, IIM, and Kolkata. He has represented India in United Nations in 2002 and has got a privilege to address the UN General Assembly.

Shri Ramnath Kovind was appointed as Governor of Bihar on 8th August 2015, the acting Chief Justice of Patna High Court On 16 August 2015. He has done some praise worthy work in his constitutional position.

Work for Social Cause

Kovind actively joined an SC/ST employees’ stir in 1997 against specific orders issued by Central Government which were likely to adversely affect the interest of them; the orders were later nullified through constitutional amendments by Atal Bihari Vajpayee led NDA government.

During his practice as an advocate, Kovind provided free legal aid to the weaker section of the society, specifically poor girls and SC/ST women under the aegis of Free Legal Aid Society, Delhi.

Kovind is married to Savita Kovind. He has a daughter, Swati and a son, Prashant Kumar.

It is a pride for people of India that we will have an eminent and renowned personality with a clean image as our next President.