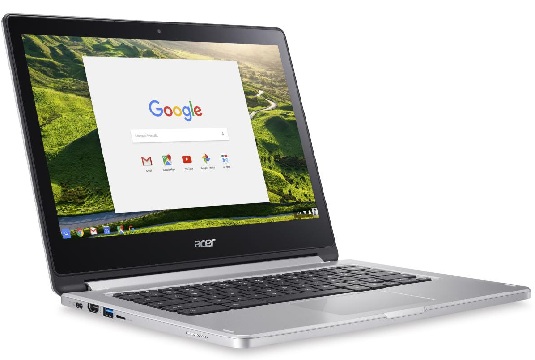 Chromebook is laptops, that runs on Chrome OS. Many Chromebooks have been launched by various companies but Acer’s new Chromebook is quite different. Acer announced its new Chromebook R13 at a [email protected] press event in IFA show in Berlin. It is industry’s first 13.3-inch display, convertible Chromebook. There are other Chromebooks available that can double as a tablet in 10 and 11 inch space but this is the first time, when a larger version that can backflip, will be available.

Chromebook R13 has Chrome OS but can run Android app too. It features a big 13.3-inch screen which can be used in various kinds of mode and as a tablet as well. This is possible due to 360-degree hinges. The new Chromebook has 12 hours of battery life which means it increases user’s productivity. It also has facility and support for Android app through Google Play Store.

James Lin, General Manager of Commercial & Detachable Notebooks, IT Products Business at Acer said, “The 13-inch touch display is large and vibrant, so it’s ideal for anything from homework and spreadsheets to games, video and fun apps, Plus, up to 12 hours of battery life means our customers can use it at school or work and continue using it into the evening for activities like homework and watch movies.”

The Acer Chromebook R 13 comes with a 13.3-inch touch-screen high-brightness Full HD display. Its resolution is 1920×1080 and it has IPS[2] technology. It provides vivid colors and sharp images and text. The display has an HD webcam with High Dynamic Range imaging and 720p HD audio/video recording and an integrated microphone useful for chatting on webs.

There is also HD audio with dual built-in speakers on the lower portion and sides of the Chromebook. The Acer Chromebook R 13 weighs only 1.49kg. Battery life of 12 hours provides users with longer duration of productivity, connectivity, and entertainment. The device has a MediaTek M8173C CorePilot quad-core processor for great performance.

The new Chromebook R13 has USB Type-C port, USB 3.0, HDMI, Bluetooth 4.0, microphone and headphone jacks for connectivity. It comes in several variants either with 64GB, 32GB or 16GB storage and 4GB dual channel.

The Acer new Chromebook can easily work between four modes that are Laptop mode for input and typing, Display mode display is closer to a viewer, Tent mode viewing and touch experience in confined spaces and Pad mode allows to use Chromebook as a tablet.

The starting price for the new AcerChromebook R13 is $399, and it will be available in October. Acer earlier launched Chromebook 11 inch which was successful too. With Chromebook R13 it has gone a step ahead to its competitors. It is well designed to run Android Apps and can be a laptop as well as a tablet. Chromebook has been not that successful in Asian countries as users prefer Window OS here. Acer has not announced the launch of Chromebook R13 in India till now. Indians have to wait to witness industries largest Chromebook for some more time.