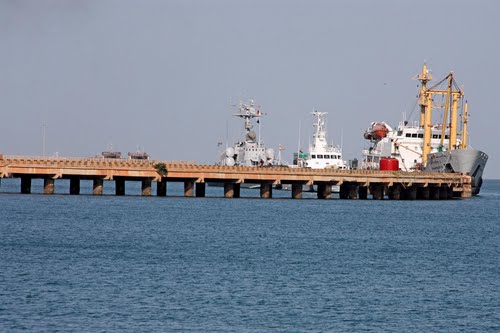 Nitin Gadkari, Union minister for road transport, shipping, and highways, have approved the proposal of constructing sea link between Okha and Bet Dwarka. Union Minister also asked to make an underground tunnel at its end.

Gadkari had come to address the public meeting after laying the foundation stone for widening Bhavnagar-Veraval National Highway 8E. Under this widening project the current two lanes, bitumen road will be converted into four lanes cement concrete roads. Rs 4,976 have been given for this The National Highway within 30 months. This project is said to boost connectivity of Alang ship-recycling yard in Bhavnagar and Pipavav port in Amreli and Somnath temple and Veraval port.

On this occasion, Chief Minister of Gujarat Anandiben Patel and state Roads and Buildings Minister Nitin Patel had requested Gadkari to approve the state government’s proposal to construct a sea-link to connect Okha and Bet Dwarka where thousands of tourists come to see the temple of Lord Krishna. Around 5,000 people live in Bet Dwarka and to reach Okha the only way is by boat.

Gadkari replied by saying “I hereby approve the construction of a sea-link connecting Okha and Bet Dwarka at an estimated cost of Rs 400 crore. We shall start work on it very soon. But, the Prime Minister has told me that the end of the bridge should be an undersea tunnel. I request Nitinbhai and the Chief Minister to give me suggestions as to how we can materialise this dream of Modi.”

Gadkari also announced the widening of Somnath-Porbandar-Dwarka section of National Highway 8E to four-lane. The work will start before August 15 and will cost Rs3,000 crore. The Bhavnagar-Veraval road will become the second cement concrete road in Gujarat after NH-59 that connects Godhra to Dahod.