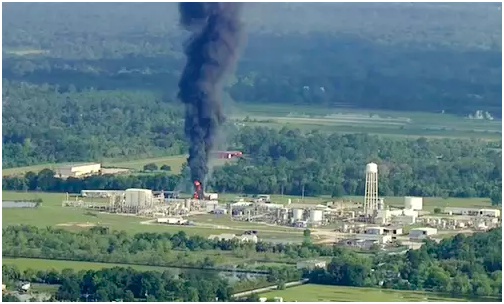 Harvey aftermath: The worst is not yet over – Blast at Texas Chemical Plant

Texas Chemical Plant Explosion 2017: The worst is not yet over for the people of Texas. A massive fire broke out in an Arkema plant in Crosby, a chemical plant in the northeast of Houston on Friday evening; clouds of thick black smoke were visible high in the sky. A chemical storage trailer exploded in the same plant on Thursday which also had set out a fire. The chemicals are hazardous.

More fires are still expected as the cooling system in the plant which keeps the chemicals stable has been knocked out. There are still about six trailers in the plant. Smoke from the chemicals can irritate eyes, nose, lungs and can pose other health hazards. According to the plant officials, there is no serious threat to health hazards. Here we will check more detail on Texas chemical plant explosion 2017.

Though Hurricane Harvey has moved to other parts of America, there is so much chaos and desperation going the areas affected. Rescue operations are undergoing on the war footing, but the storm and rampant flooding on such a large scale has brought everything to halt. Several structures are still under water.

People are rendered homeless and there is no power supply and water supply yet in much-affected areas. Efforts are being made to restore power but some of the areas are still flooded which is making it difficult to restore the power. People are also struggling to get drinking water. Thousands are standing in a long queue to get water bottles.

President Trump is heading to Huston tomorrow. He will visit some affected places and meet the survivors. This is his second visit to Texas this week. Get latest updates on Texas chemical plant explosion.

Category 4 Hurricane had hit southeast Texas last weekend and has devastated everything. People are struggling to survive. Flooding was very severe in eastern Texas and western Louisiana. It is the worst ever hurricane that has hit the United States. About 47 deaths have been registered so far.