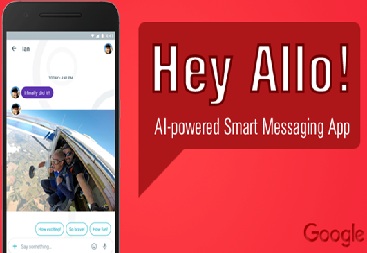 Allo is a Messaging App of Google for iOS and Android

Google is all set to launch a messaging app called Allo. It is a mobile-only app that works on both iOS and Android. It is a new messaging app with an integrated virtual assistant. It is likely that the app will be made available later this summer.

The new app Allo supports end-to-end encryption of data. It is now available in google Play store for the pre-registration process. Allo is likely to replace the Google’s other messaging apps and Hangouts. Google has made some clever innovations and added features that usually we find with other chat applications such as WhatsApp or Messenger. Its interface is designed simple and easy to understand.

Allo is a Google Smart texting app which is tied to your mobile number and works in a way similar to the WhatsApp messenger app. According to Google it would be easier to get in touch with people. With this app, you can easily invite the contacts of your phonebook. The app will provide responses to your conversation and you will be suggested responses based on your photo or text shared by you.

The innovative app contains smart functionalities which will automatically understand and reads the text. This app also suggests the regular replies to the read messages and user will need not type and hit the send. It includes emoji and a big set of custom stickers designed by artists to make it sure that it offers a wide diversity of options that would appeal users in India as well as in America. When you send a picture, a full-bleed will be displayed on the screen and you can even doodle on it. Another interesting feature is “WhisperShout”, with which you can drag your finger up or down on the button to enlarge or shrink the text before you hit send.

See also  Aetna to Withdraw From Many Obamacare Exchanges

Moreover, it’s built-in Google assistant interface provides you an access to information from Google. You can set up a conversation with @google and ask questions. It’ll respond in a similar way to Google search box as well as it will also engage in a bit of a conversation with you. You will also be suggested further searches.