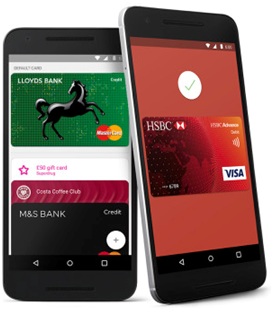 Android Pay Launches in the UK – Tap and Pay

Google’s contactless smartphone payment system Android Pay has been introduced in the UK on Wednesday, you can now pay for goods and payments through this payment system. Android Pay in the UK supports for MasterCard and Visa cards from at least eight banks.

To make use of this service, it requires you to have a smartphone running Android 4.4 KitKat or later and near field communications (NFC). You have to download and install the Android Pay app . It works in much the same way as rival systems Apple Pay and Samsung Pay. Android Pay lets you carry out transactions at contactless NFC payment terminals by tapping your phone against them.

To set up the payment system, you have to link your credit or debit card to your Google account by manually entering your details or scanning it using your phone’s camera. Once setup, you can make payment.

If you have to pay less than £30 using Android Pay, it just requires tapping on smartphone to the contactless reader, while for more than £30 amount; you have to authenticate the payment by unlocking the smartphone with a pin or a pattern or fingerprint.

Some apps will also allow Android Pay to be used to pay for goods and services on their devices instead of a traditional check out. JD Sports, Deliveroo and YPlan apps support Android Pay for purchases. Loyalty cards too can be integrated into Android Pay to get advantage of special offers.

After US, UK is the first market to launch Google’s contactless payments system. Android Pay was launched in the US in March last year. Apple Pay is the only smartphone-based systems in UK until now, Samsung Pay is yet to be introduce in the UK which is expected soon.