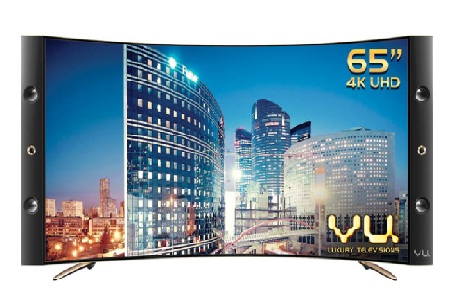 At the launch CEO and Design head of Vu technologies, DevitaSaraf said, “Our revolutionary UHD TV series and the advanced Curve TV undoubtedly are categories defining products in their own right. There are no competing products in the industry, with similar features or price points. Discerning consumers who are looking for an all-inclusive techno-luxurious experience in one Television set, the latest range of TVs from Vu’s product stable is the ultimate answer. Braced with first-of-its-kind design features, our TVs make watching anything and everything, a riveting experience.”

Saraf further added, “We a have the largest range of TVs after Sony, Samsung, and LG with 22 Unique SKUs in the Indian market. We have had 350% Year on Year growth since 2013 aiming for a turnover of Rs.600 Cr in 2016-17. With the launch of our new portfolio and much more in the pipeline, we are confident of achieving that goal within the stipulated time frame”, she added.

The 65 and 75 Premium UHD TV comes withPixelight HDR Technology, a premium smart chip with Quad core processor and a button on the remote for Netflix, Ultra-smooth motion rate, 4X ultra-high definition and ultra-dimming feature. The UHD TV’s have brushed steel and carbon weave design elements.One can buy the 65” Premium fromFlipkart at a starting price of Rs 1,56,000 and the 75” at 3,00,000.
55 and 65 Curve UHD features 4K Ultra-high definition, A+ Grade Panel, 4x Quad core CPU and GPU and nScreen features. You can buy the 55” curved UHD TV at Rs 1,00,000 and the 65” will be available at Rs 1,80,000. This will go on sale from the first week of October.

Vu claims that their pricing is 50% less as compared to the same product offered by LG and Samsung. It will be interesting to note whether Vu can come I line with Sony, LG, and Samsung, the highest TV sellers in India, with the help of newly launched TV’s.