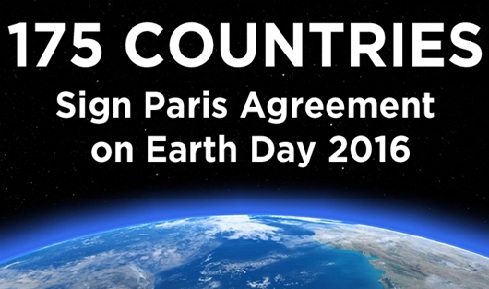 World leaders from as many as 175 countries including India, China and US signed Paris Climate Agreement at the UN headquarters in New York on Friday. With this, it was emphasised that more action was needed to tackle issues raised due to the climate change.

With the planet temperature is rising to record levels, glaciers melting leading to sea levels rising, it was palpable at the U.N. signing ceremony to have the Paris Agreement enter into force. The covenant aims to take multiple measures to save the planet from disastrous consequences of climate change.

Ban Ki-moon, the U.N. Secretary-General addressed the gathering. He said, “This is a moment in history. Today you are signing a new covenant with the future “. He also added, “The world is in a race against time”. He unequivocally said that the era of consumption without consequences is over. And signing an agreement by the world leaders stands for more than promises.

The agreement is to remain open for signature for one year – till April 21, 2017. However, signing the agreement is not only requirement to make it operational, it is only the first step in the process. The leaders from the respective countries have to make their government ratify and approve the agreement. For the agreement to enter into force it requires ratification from at least 55 countries that account for an estimated 55 percent of the total global greenhouse gas emissions. The agreement can become operational 30 days after 55 of these countries ratify the agreement.

15 countries submitted their instruments of ratification on Friday, mostly it included small island nations. It indicates that there is a tough and long road ahead before the covenant comes into force.

France was the first country that signed the agreement on Friday and has promised to ratify it by this summer. China emits the highest pollutants, it has announced to work it out before the G20 summit in September in Hangzhou. The US also announced that it is looking to join the agreement this year.

India has not made any announcement yet. It maintains that the burden of fighting climate change cannot be put on the shoulders of the poor after decades of industrial development by the rich nations. It has announced its plans to quadruple its renewable power capacity to 175 gig watts by 2022.

The Paris agreement sets a target of limiting global warming to below 2 degrees Celsius by 2100 which is near to pre-industrial levels. To accomplish the feat, each nation needs to set its own target and have to work towards reducing emissions.

The Paris Climate agreement is the most ambitious climate change agreement made in a history. It offers a long-term, the sustainable global framework to reduce global greenhouse gas emissions where for the first time, all the countries have committed to putting forward their own successive and ambitious climate targets and report on their progress towards the standardized process of review.