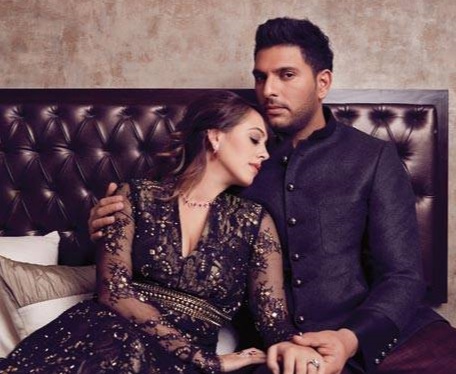 Yuvraj Singh with Hazel Keech Photos and Wedding News: The news of Yuvraj Singh returning to one day team of Indian cricket is doing rounds from some time. BCCI had called Yuvraj for a fitness test. According to the news, Yuvraj has passed the fitness test. In personal life, Yuvraj is all ready to marry his fiancé, Hazel Keech. It is said that the couple will get married on 30th November in Yuvi’s hometown Chandigarh. The couple got engaged last year in Balli in a private party. Since then everybody was waiting for their marriage.

According to the reports, Yuvraj’s family has confirmed the marriage date. The marriage event is planned to be kept away from media. However, the reception will take place in December. 5th or 7th December will be finalized for a reception.

Yuvraj knows Hazel since three years but started actually dating her only three months before their engagement.

Yuvraj played his last International one day cricket opposite South Africa in 2013. Now he is said to pass the fitness test in Bengaluru. After three test matches, there will be five one-day series with New Zealand. As KL Rahul is injured, Gautam Gambhir is also returning to the team after two years.

Yuvraj, who had been a hero in many matches was in very bad form and hence was out of a team for around three years. However, it seems the lady luck, Hazel has brought the professional life on track too, for the cricketer. We hope to see our one of the favorite striker on the crease soon.