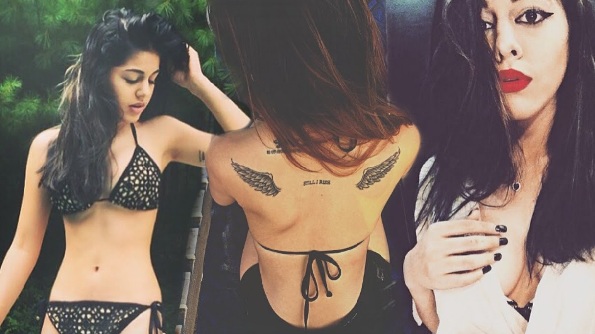 Aalia Ebrahim, daughter of an actress and host of TV talk show Pooja Bedi has just turned 18. She is 5.5 inches tall, has got a perfect figure and attractive face and looks like she is thriving to be a part of the modelling world and film fraternity. She has uploaded sizzling photographs on social media like Instagram. She has thousands of followers on Twitter.

Many star kids love to follow footprints of their parents and loves to work in the field of filmmaking, be it acting, modelling, script writing, producing or directing a film. Some of them succeed, whereas others don’t get a strong foothold. Aalia Ebrahim with acting running in her blood and her bold personality holds a promising future.

Aalia Ebrahim was born to Pooja Bedi and Guetta Ebrahim Furniturewalla in 1997. She is from very rich family. She resembles her father a lot.

Her mother Pooja Bedi is a daughter of producer – director Kabir Bedi and Protima Bedi and is a multifaceted actress who has acted in many Hindi films.

Aalia has a brother named Omar. She is doing studies.

Alia Ebrahim has officially not released any photo albums. She has posted stunningly beautiful, hot and sexy pictures on Instagram and continues uploading more.

It is apparent that she will soon have an official photo-shoot. There is news that she will take modelling and acting assignments very soon.

Aalia is too young to have any serious relationships. There has not been anything public about her dating somebody. Perhaps she is focussing on starting a career.

She is getting a lot of attention on social media and we might soon see the dazzling and bold Aalia Ebrahim on the screen.