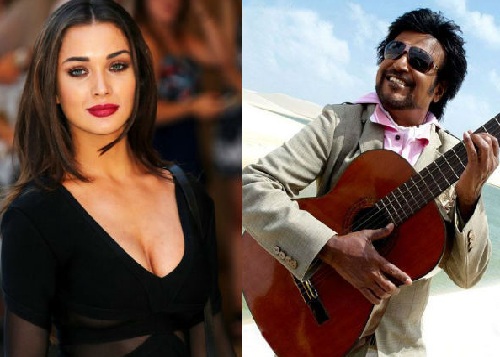 British model and actress, Amy Jackson took to twitter to share a selfie with South Indian superstar Rajinikanth. She has also twitted that she feels honoured to share a screen space with the superstar. She said, “I don’t think I’ve ever looked so happy on a photograph.”

The beautiful actress Amy Jackson is playing a lead role in Shankar’s sequel of Enthiran – 2.0 starring Rajinikanth. Her tweet shows that she is extremely delighted and very excited to act in a film. It is a great achievement for Amy as she has found an opportunity to act opposite RajiniKanth in her short film career.

Bollywood star Akshay Kumar is playing a negative role in the film, plays an evil scientist, his look in the film is inspired by a crowd and will leave people astonished. Music for the film is produced by A R Rahman and sound design by Rasool Pookutty. The film is likely hit the screens in 2017.

Amy Jackson is busy juggling between the sets of Enthiran 2.0 and her other projects. She is also joining sets of another Hindi film directed by Sohail Khan in which she is paired with Nawazuddin Siddiqui. The title of the film is yet to be declared.

Film Enthiran 2.0 is a sequel of the Enthiran which was released in 2010, which starred Rajinikanth and Aishwarya Rai Bachchan in the lead roles. Akshay Kumar also had a role in the film.

Amy Jackson is 24. She started modelling at the age of 16. She pursues her career as a model in the UK. She acts in Indian cinema, especially Tamil films. She is acting since 2010. Her first Bollywood movie was romantic drama ‘Ekk Deewana Tha’, released in 2012. In the same year, her first Telugu film ‘Yevadu’ was also released. She starred in ‘Sing is Bling’ opposite Akshay Kumar in 2015.