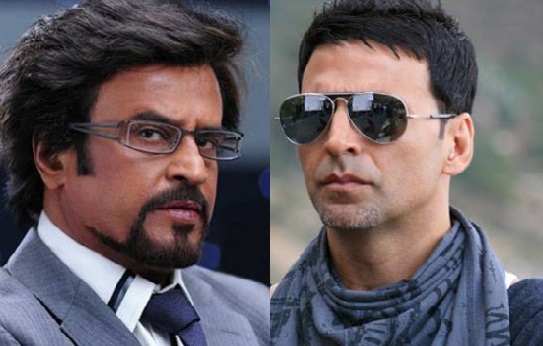 The stadium is buzzing with activities and the stage is all set as if there is an Indian Football League game between Chennai Versus Mumbai.

The stadium is decorated exclusively for the shooting sequence with some area embellished with inflated balloons having IFL logo imprinted on it. All around the stadium inflated football with ribbons are tied. Posters are also stuck that read ‘Chennai Versus Mumbai’ as it is the theme for shooting.

The matter was kept confidential, but such a large scale preparation in the heart of the city can’t remain hidden for a long. Though it is not confirmed officially, there are reports that the shooting will continue for 40 days.

There are millions of fans of Bollywood’s ‘Khiladi’ Akshay Kumar and South superstar Rajnikanth and a large number of fans are rushing to the gates of the stadium with a hope to catch the glimpse of their favourite stars. They are returning in despair to know that both the stars are yet to arrive. They are to be at the stadium on Monday for shooting.

The director, assistant directors and crew members are already there at the venue busy discussing the sequence and all other matters.