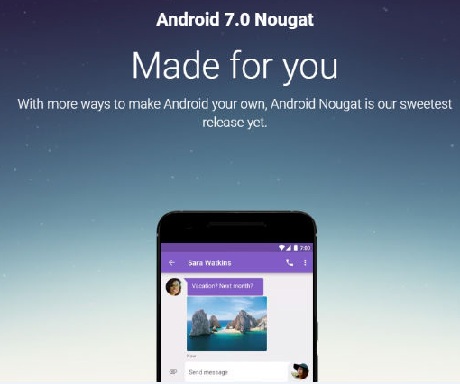 Google Android 7.0 Nougat is out of beta version from today. According to Google authorities, it is the sweetest release from the company and from today the OS update will be available for Nexus devices such as Nexus 6P, Nexus 6, Nexus 9, Nexus 5X, Nexus Player, Pixel C and Android based 4G General mobile. LG V20 will be the first phone to use Android 7.0 Nought out of the box.

Earlier in a month of March, Google had released a beta preview version testing program which allowed users to enrol just by registering for the OS on a website. Those who registered for it have started receiving the over the air, OTA updates of the developer preview version. The Nought updates have already started rolling out for Nexus who already have the developer preview of it, whereas it might take a couple of days for Marshmallow users to get the OTA update.Android central has also made a guide available on how to get the update manually on your Nexus phone.

Google had opened up voting for the new Android 7.0 and had received a lot of entries.Surprisingly the name chosen is Nought; there was a buzz that the name for new Android version will be Nutella Google.

Google had invited input from thousands of Android fans and developers for innovative Android version and the new Android Nougat reflects the input.

The Android Nougat Includes Over 250 Major Features, Some of the Exciting Features Are:

More personal: The new OS provides various ways to customize your phone to make it more personal. It includes over 1,500 different emoji built into it to express yourself.

Quick Setting Controls: Control setting has been made very easy and you can make a setting for things like Wi-Fi, Bluetooth, flashlight etc. quickly. You can also move them around on the screen that caters to your needs the most.

More Productivity with Multitasking: It makes you more productive as you can handle multitasking very easily, whether it is about responding to emails, direct reply to notifications, quick switch between your recently used apps, multi-windows that let you run two apps side-by-side etc.

Battery Smarts: The Android Nought is made with a feature called Doze feature that drops to lower power usage when it is not being used, i.e. it is in a pocket or a bag.

More secure: When it comes to data security and privacy, the new OS provides robust layers of security and data encryption. The Nought comes with a newly added feature such as file based encryption, direct boot to help the device start faster and seamless updates that can install updates in the background. New security features are also added for those who want to use the Android device in the enterprise.

Get the robust and sweetest update of newly developed Android 7.0 Nought and enjoy the exciting features it offers!