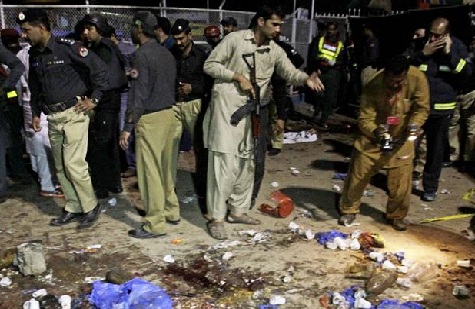 A faction of the Pakistani Taliban, Jamaat-ul-Ahra claimed responsibility for a bomb attack that took place on Sunday on Park in Lahore city of Pakistan. There were about 72 people – mostly women and children were killed and more than 300 wounded. Many of the wounded are in critical health condition. You can watch here all photos after the attack.

Ahsanullah Ahsan, spokesperson for Jamaat-ul-Ahrar said that it was targeted to the Christian community who were celebrating Easter Sunday.

Lots of people were gathered and children were enjoying rides in Gulshan-e-Iqbal park where the explosion took place.

There were chaotic scenes in the park. People were running with children and carrying the wounded in their lap.

It was very tragic as people were screaming and crying and looking for their children amid the debris.

According to local police, it appears suicide bomb attack, but investigations are ongoing.

Punjab state government has declared three days of mourning and pledged that it will strive to bring the perpetrators to justice and will not forgive anybody guilty. President has condemned the attack.

The United States has also condemned the attack and described it as a cowardly act. A health advisor to the state has appealed people to donate blood to help the wounded.

The park in which the massacre took place was already manned by police and private security guards. According to the police, there was no any specific treat alert.