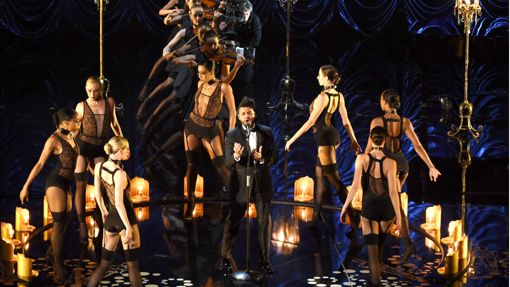 Watch the Weeknd Perform “Earned It” At the 88th Academy Awards

Weeknd’s rendition of “Earned It” at the 88th Academy Awards on Sunday won everybody’s heart. Weeknd’s music video song “Earned It” got a nomination for Best Original Song for the Academy awards. It is a solo song from the movie “50 Shades of Grey”.

There was buzz that the 88th Academy Awards nominations were lacking variation, but Weeknd’s performance proved it wrong. The rendition left everybody elated. It created a night club feeling to the prestigious award presentation ceremony.

“Earned It” Performance at the 88th Oscar Academy Award

Weeknd clad in black dress stood in the centre of the stage that was transformed into awesome looking bondage chamber with chandeliers and candles. He was surrounded by live violinists and a crew of female dancers who sensually moved around the R & B singer. Weeknd deserved the nod from all present at the Academy Awards.

Abęl Makkonen Tesfaye, professionally known as Weeknd is a Canadian singer, songwriter and record producer. He became popular few years back through his songs on YouTube channel.

He has released many music albums, some of which are “Kiss Land”, “Love For”, “Beauty behind the Madness”, “The Hills” and “Can’t Feel My Face”. Many of his songs are acclaimed. “Earned It” became a breakthrough hit for him.