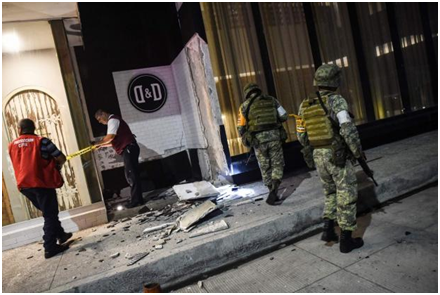 Earthquake off Mexico Coast: A massive earthquake hits off the coast of southern Mexico late Thursday night at 12:49 a.m. when people were asleep. The deadly earthquake swayed buildings violently and people were off their homes in the streets in panic. The epicenter of the earthquake is located 102 miles west of Tapachula near the small town of Pijijiapan in southern Chiapas State at a depth of 22 miles. The earthquake was felt as far as Mexico City and Guatemala City and is considered the strongest ever experienced in 100 years. Here you can read news for Mexico City Tsunami 2017 warning signs.

The quake was so powerful that the tremor continued for a minute and people were so frightened that residents fled away from their apartment buildings more than 65o miles in Mexico City.

The deadly earthquake has taken a death toll of 5 and triggered Tsunami waves. The US Tsunami Warning System has warned that hazardous tsunami waves may be generated on the Pacific coasts which can affect several Central American countries.

According to the latest update, three people died in Chiapas and two in Tabasco. Several homes and a hotel in Oaxaca have collapsed. There are possibilities of a major damage. Following the quake, 1 million houses were without electricity, but now it has been restored to 800,000 homes. The United States Geological Survey has issued a red alert. According to them high casualties and extensive damage are being feared.

National Weather Service’s Pacific Tsunami Warning Center has predicted tsunami is forecasted in Mexico. Tsunami waves taller than 10 feet are likely to hit the coast of Mexico and waves could spread as far as Ecuador, New Zealand, and Vanuatu.