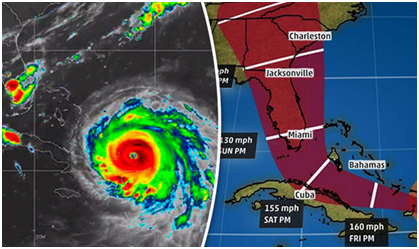 Irma Updates as on September 08, 2017: The National Hurricane Center has now issued the warning to South Florida as it bears down to the state. Miami is in the way of the monster storm. Though Irma may turn category 4 from category 5 for now, it remains equally enormous and menacing. The wind speed has been slowed a little to 165 mph. The storm is surging and not expected to weaken much. Full hurricane conditions are likely to take place within 36 hours.

Currently, the storm surge across South Florida and five to ten feet swell is forecasted all along the coastline. It is a life-threatening condition for people over there. They have been urged to take all the necessary actions to protect themselves and their property.

To avoid casualties, Governor Rick Scott has made mandatory evacuation orders from seven cities around Lake Okeechobee which include South Bay, Lake Harbor, Canal Point, Pahokee, Clewiston, Belle Glade and Moore Haven. According to the government officials, the evacuations are a safety measure and once the storm hits, it becomes difficult to get out.

Hurricane Irma remains strong as it approaches Florida and may cause landfall as a Category 4 storm on Sunday. It is expected that strong tropical winds will strike Palm Beach County by Saturday afternoon followed by hitting of Hurricane force-winds pre-dawn Sunday.

Irma is so intensified that it is feared that buildings may get damaged and large trees get uprooted by the destructive winds.

Irma is edging further west which also takes the west coast into its plunge. Hurricane is likely to affect Bonita Beach north to Ana Maria Island and from Jupiter up to Sebastian Inlet. According to the latest warnings, the entire state of Florida may be ranked by the devastating storm; the storm is so massive that it can wreak havoc on the Atlantic coast, the Gulf Coast, and Central Florida.