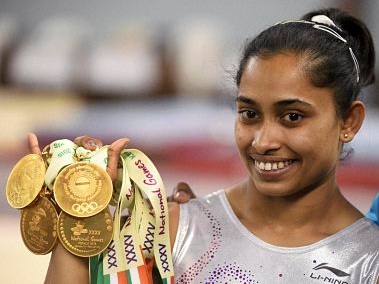 Prime Minister Narendra Modi praised Dipa Karmakar on being qualified for Rio Olympics Games. She is the first Indian woman to achieve this feat. She has brought a name and fame to India through her determination.

While addressing the convocation of Shri Mata Vaishno Devi University at Katra, the PM hailed that a daughter from the country has been selected in gymnastics stream for the coming Olympics for the first time and the nation feels proud of her. Her sheer determination brought this glory.

Narendra Modi congratulated the student community at the convocation and said that Dipa Karmakar’s achievement shows that if you want to excel in life, it is essential to have a firm determination, you can overcome obstacles such as lack of resources or limited facilities.

The PM also said that he desires to see girls students participating in every field in large number in such a way that a day will come when there may be a movement for men’s reservation.

Dipa Karmakar is 22 years old. She is an artistic gymnast from Agartala. She created a history on Monday when she got qualified for Rio Olympics. She is not only the first Indian woman to get qualified but also an Indian gymnast qualifying for the Olympics after 52 years. It is an achievement to reckon with. She is very desperate to win a gold medal.

It has not been an easy journey for the Tripura girl. She owes a lot to her coach Nandi. At the 2014 Asian Games, she had finished fourth. Dipa is credited as the first Indian female gymnast to win a medal at the 2014 Commonwealth Games. She had also won bronze at the Asian Championships in Hiroshima the same year. She stood fifth at the final round of the 2015 World Championships. Dipa was very nervous as well as confident at the qualifying rounds as this was the last chance for her.

The PM also lauded the feat and effort made by ‘Mountain Man’ Dashrath Manjhi for carving a road through a hill at Gehlour in Bihar who had worked for 22 years from 1960 to 1982 make the road.