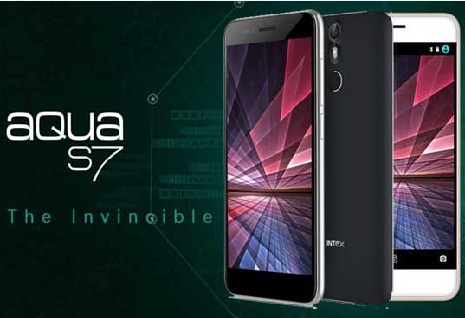 Intex 4G VoLTE Phone Aqua S7: Intex was founded in 1996 and is Indian manufacturer of cellphones. It headquarters is in New Delhi. Intex has launched its new smartphone Aqua S7 on Monday at an event held in Delhi. Aqua S7 is a budget (low price) phone priced at Rs. 9,499 which has all features that phone under 10,000 has. Aqua S7 comes with Reliance Jio offer. What makes the new smartphone different from other phones of the same segment is the fact that it has Asahi’s tough glass in place of gorilla glasses. Another important feature is a presence of fingerprint sensor on the rear panel.

Looking for the front one gets the feeling of an iPhone but the rear look resembles Motorola.The phone will be available in three different color variants – Champagne color, Rose Gold and Dark Blue and is 4G VoLTE enabled.Intex Aqua S7 comes with dual SIM.

Intex Aqua S7 has a plastic body.It runs Android 6.0 Marshmallow and features a 5-inch HD (720×1280 pixels) display. The company claims that the display is scratch proof.The new smartphone is powered by a 64-bit 1.3GHz quad-core MediaTek MT6735SoC coupled with Mali-T720 GPU. It has 3GB of RAM

One important feature of Aqua S7 is its emergency mode. When this mode is enabled SOS messages can be sent to pre- determined contacts by holding volume up and down keys. One can also set the phone before- hand to send SOS messages repeatedly in decided time.

The design of the phone is quite impressive. The phone does not show lag when different apps are launch in between. This is quite impressive for a phone of this range. Various cell phones are competing in launching the smartphones in a budget friendly line up. Users have a great option to choose between smartphones priced below Rs. 10,000.Intex Aqua S7 is surely one of the good choices to make.