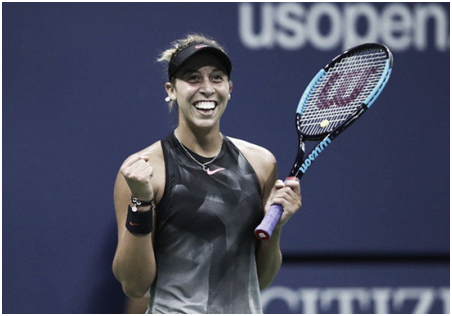 Madison Keys US Open 2017 Results Today: Madison Keys Shrieks with Joy as she beats Kaia Kanepi and reaches U. S. Women’s Open semi-finals. Her Tennis ranking is very good. Keys is very excited about the win and said, “This means the world to me”. With this, she becomes forth American women to make it to semis. Coco Vandeweghe, Venus Williams, and Sloane Stephens are other three American women to be in semi-finals.

The 22-year-old Keys brushed aside Kanepi in two sets by 6-3 6-3 within 69 minutes only. She didn’t drop any serve and had broken only once in the first set and twice in the second. She will take on 20th seed Vandeweghe onto Arthur Ashe Stadium in semi-finals. Vandeweghe made to the semis by beating over world No. 1 Karolina Pliskova of the Czech Republic with a 7-6 (4) 6-3. The other semifinal will be held between ninth-seeded Venus Williams and unseeded Sloane Stephens. Williams made a victory against 13th-seeded Petra Kvitova of the Czech Republic and Stephens ousted 16th-seeded Anastasija Sevastova of Latvia.

Keys’ victory made a way for Americans to grab the U. S. Open title as all the semifinalist to the tournament are now Americans. They are heading out to Flushing Meadows for the semi-finals. This is after 26 years that all semi-finalist women in the U. S. Open are Americans. Way back in 1981, Tracy Austin, Chris Evert, Martina Navratilova and Barbara Potter made it to the finals. Among the four semi-finalists, Williams is the only one who has reached a Grand Slam final.