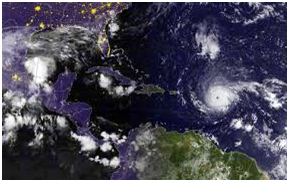 Hurricane Irma 2017 video footage live: Residents of Caribbean and Florida have been urged to evacuate as the most the Hurricane Irma has intensified and turn into a powerful storm of category 5 and have become one of the strongest storms ever struck in Atlantic. Here we will check Hurricane Irma Florida evacuation zones map and Florida track and field.

Irma may cause hazardous conditions to Puerto Rico and some area of the Caribbean from Wednesday and Florida from Friday. A state of emergency has been declared in the state of Puerto Rico.

The Atlantic storm made landfall over the Caribbean island Barbuda early morning today; no reports of casualties have been recorded; the government has sent helicopters to the region to make the survey. The Irma is heading across the Caribbean. According to the latest update, Irma has hit St. Marteen recently and heading towards Virgin Island and Puerto Rico. The hurricane will bring life-threatening wind and rainfall in Puerto Rico today. The state government has declared a state of emergency to fight the hit.

The latest weather analysis predicts Irma could then move ahead towards the Florida Keys and the southeast of Florida; a major city Miami is a part of it.

Miami based National Hurricane Center (NHC) has asked residents living in hurricane prone parts of the coast to be prepared with an escape plan in a short notice if the situation demands. It is likely that Miami Mayor may order evacuation to minimize casualties. The NHC predicts that direct impact of Irma is likely to hit later this week and weekend in parts of Irma-prone area of Florida. However, they say it is too early to specify the timings and magnitude of the storm.

President Donald Trump is also worried and tweeted to say there is “no rest for the weary” as he watches Hurricane Irma “closely”. He also said that his team has done a good job in Texas and is still doing it. Teams have also reached the Caribbean and Florida.