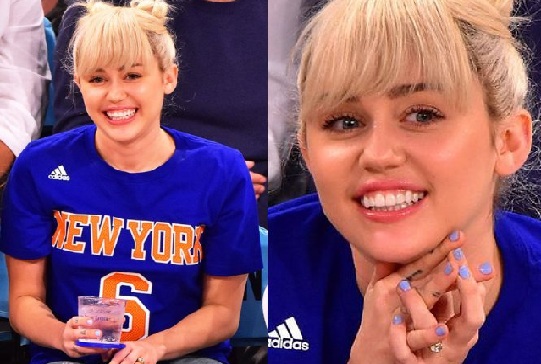 Miley Cyrus, a 23-year-old singer, attended Cleveland Claviers Vs New York Knicks games at Madison square on 26th March 2016 in New York city. She was accompanied by a sister, Brandi and mom Tish. Miley showed off her shiny engagement ring during the game. Here you may check Miley Cyrus engagement ring pictures, details and cost. She has been engaged to Liam Hemsworth.

Miley Cyrus united with her fiancé Liam earlier this year. Now she spends most of her time at his place, Malibu Pad. She remains busy there cooking and cleaning for her fiancé.

At the basketball Knicks games on Saturday, Cyrus trio also posed for a photo which was later shared by Miley on Instagram. She also shared her photo in which she was hiding her face. She did this when she was focused on the big screen during the game. She captioned the photo as “Embarrassed of all embarrassed”.

Brandi also posted her photo checking out Claviers LeBron James. Mile yaws in New York last week shooting for Woody Allen’s upcoming Amazon TV series. She also announced that she will be the coach on The Voice season 11.