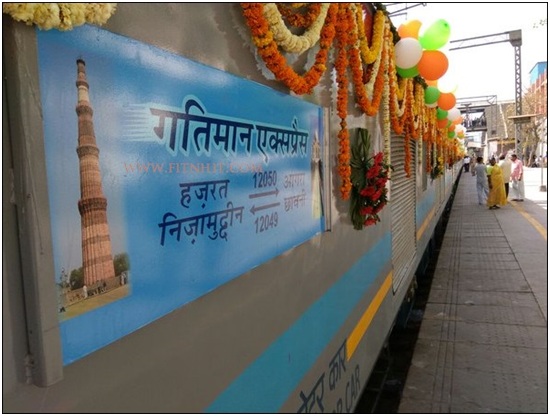 Keeping promises of the long-term technological overhaul of Indian Railways, the Railways launched its fastest train Gatimaan Express today. The train travelled between Hazrat Nizamuddin station at South Delhi and Agra station at 160kmph speed. The train was flagged off by Union railway minister Suresh Prabhu today morning at 10 am. It covered its maiden trip of 185 km in 100 minutes which covered 28 intermediate stations. It made a 10-minute halt at Delhi to the request of media for coverage. Know all about Gatimaan Express Speed, Timings, Ticket Booking and Train Number.

The Gatimaan is to run six days a week except Friday on which the Taj Mahal remains closed to visitors. The train duration is 15 minutes shorter than the current trains between the two cities. It is a technologically upgraded luxury train that features high-power emergency braking system, automatic fire alarm, bio-toilets, LED lights and micro busters for a good fragrance. It provides access to Wi-Fi and with its onboard entertainment service; passengers can watch videos on their smartphones, tablets or laptops.

Hostesses will serve passengers and welcome them with roses as they board the train. Passengers will be offered four times a meal during the journey that includes juice, tray meal (cutlet, butter, and bread), meal box and finally tea. The menu is an eclectic mix that includes wheat Upma, Kanjeevaram idli, aloo kulcha, mini dosa, Spanish omelet, date walnut cake, chicken rolls and Swiss rolls. Each coach has its own pantry.

It has made a history of Indian railways as it has set new standards in terms of speed and other aspects. Though the train’s speed is far behind than that of the world’s fastest train in Japan, this opens a new era for Indian Railway and the way we will travel. The Railways plans to roll out nine more routes in near future that include Delhi-Kanpur, Delhi-Chandigarh, Hyderabad-Chennai, Nagpur-Bilaspur, Mumbai-Goa and Nagpur-Secunderabad.