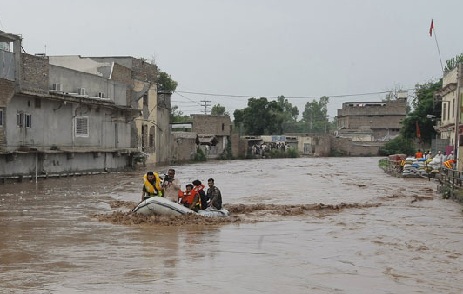 Flash floods caused due to torrential rains are believed to cause the death of at least 57 people in Northern Pakistan. Around 27 people were injured too. The rain started on Saturday that brought floods in the parts of Khyber Pakhtunkhwa, Kashmir, and Gilgit-Baltistan Provinces.

According to Pakistani national disaster management official, Khyber Pakhtunkhwa was affected the most due to rain. 14 people died in Shangla district, 12 died in Kohistan and eight in Swat. PoK and Gigit Baltistan has landslides which took toll of eight people. Many houses were swept away in the devastating flood.

Karakoram highway between Gilgit and Chilas was damaged due to the landslide. This blocked important land link with China.

President Mamnoon Hussain expressed his sadness over the death of people and loss of property. He also ordered the concerned authorities to take measures to help people.

Habib Khan,a resident of northern Swat valley, told local TV that they were left on their own and no government official came to their help. Whereas officials said tents and other relief goods had been sent to the affected region. Local media reported hundreds of people have moved to safer areas.

See also  How to Gain Weight If You are Skinny